Luban on Via Regia

Luban is located by an old, yet extremely important trade route that latitudinally crosses Europe – often referred to as the King’s Road – Via Regia. Although the route of this road nowadays is imprecise, one has to keep in mind that its most important and at the same time easily defined fragment ran from Leipzig to Wroclaw through such towns as Dresden, Bautzen, Görlitz, Luban, Nowogrodziec, Boleslawiec, Legnica. This route was described for the first time on a map as Via Regia in 1732. The author of this map, Friedrich Zürner, justified the name he used by presenting that the road in question for hundreds of years was protected by royalty: Czech kings, emperors and the Polish – Lithuanian Commonwealth king of Wettin dynasty – Augustus II the Strong. It is worth remembering that Via Regia was also known as military road (Heerstrasse). At first the Thirty Years’ War, and then Great Northern War, Silesian wars and Napoleonic wars clearly showed its operational advantages. Furthermore, as Via Regia was widely used by people from various social and religious groups, it served as a specific corridor that allowed for a constant flow of different thoughts, ideas and novelties. For several years in Germany, and recently also in Poland people have tried to use this cultural heritage of the King’s Road to stimulate not only tourism, but also local economy, culture and science. 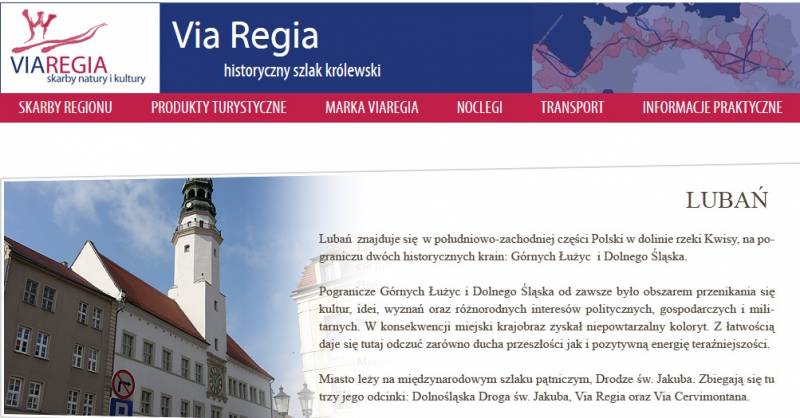 Luban in Via Regia project

Nowadays Luban takes an active part in Via Regia project – getting to know Europe since historical times to the future, which serves strengthening the marketing strategy of the region. The main task of the project is to create a “promotional shield” over all the region – i.e. an area from Zgorzelec to Zlotoryja. Creating the region’s image allows, on one hand, an efficient contact with potential guest both from the country and abroad, and on the other hand makes it easier to bring new products for tourists on the market. One of key products of the abovementioned is a historical event “Days of Bracka Tower”. The staging “Storming of Bracka Tower” performed on September 10, 2011 served as its announcement. The event is planned to be held annually and, owing to its rich offer, should become an interesting attraction for wide range of people both from the country and abroad. Furthermore, a pack of tourist products is being prepared that should appeal to fans of regional history, culture and environment. Of course one cannot forget about proposals for people preferring to spend their free time actively, so we have prepared a pack of activities related to Kwisa river and routes for cyclists.